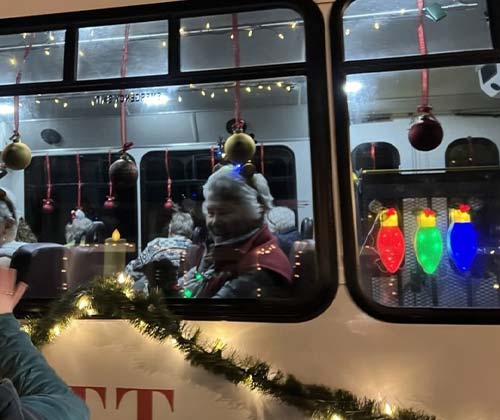 You know, Midcoast Maine does love a festival, even in the cold weather (especially in the cold???). For the first time, and in honor of our upcoming 25th Anniversary in 2023, Bartlett Woods recently participated in TWO local festival parades. Our creative staff designed a holiday look for our 12-seater bus, inside and out (Thank you Mary, Andy, Mike and Amy). Knowing we would be parading after dark, the emphasis was on LIGHTS and SPARKLE. Amy’s Activities sign-up sheet was quickly filled with residents who wanted to go along for the ride, and represent our
happy home. And so, for Rockland’s Festival of Lights Weekend, driver Mike volunteered to lead us down Main Street for the Saturday night parade. Numerous watchers and parade floats gathered to celebrate the beginning of the holiday season. There was music, lights, lots of smiles and good cheer exchanged between all of us. Our resident passengers sang carols and waved enthusiastically to the crowds, who waved right back, and even cheered for us! Hearts were definitely warmed on both sides of the street. 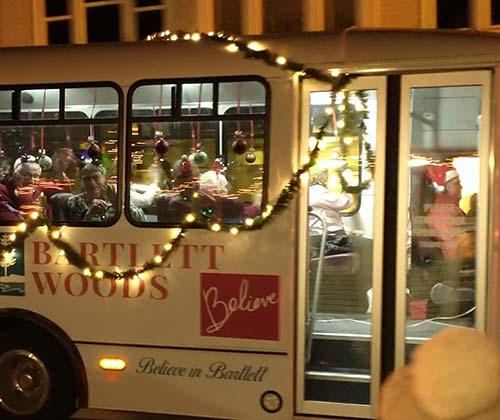 The following weekend, again with Mike at the wheel, we joined the parade in Camden for Christmas By-the-Sea. Many participants from several towns created a long chain of bright, shiny vehicles that crawled along side streets to downtown. Who knows how many parade watchers there actually were? There seemed to be thousands, leaving little space along the route to travel. Our decorations, lights, happy faces, and first-time appearance seemed to be a big hit.

Thanks to the local media and other friends who snapped shots of us at both events. What a way to end one year, and begin a milestone 25th. Thank you to everyone who made this a memorable project. See you next year!

The below article was originally posted on VillageSoup.com, you can view article in full here: https://knox.villagesoup.com/2022/11/26/santa-kicks-off-rockland-holiday-season

ROCKLAND — Santa Claus arrived at Rockland’s middle pier at noon Friday and was greeted by a gleeful group of children and parents.

Santa then joined city and civic leaders to cut the ceremonial red ribbon to open downtown Main Street for the season.

The lighting of the Lobster Trap Tree was held 6 p.m. Friday, Nov. 25. Main Street from Pleasant to Park streets was closed during the ceremony to vehicle traffic. Santa was assisted by Virginia Oliver, Maine’s oldest licensed lobster harvester, in the flipping of the switch.

On Saturday, Nov. 26, Santa returned to his workshop. Free horse-drawn wagon rides were available from 10:30 a.m. to 2:30 p.m. provided by First National Bank, and downtown businesses were open with special promotions for Small Business Saturday.